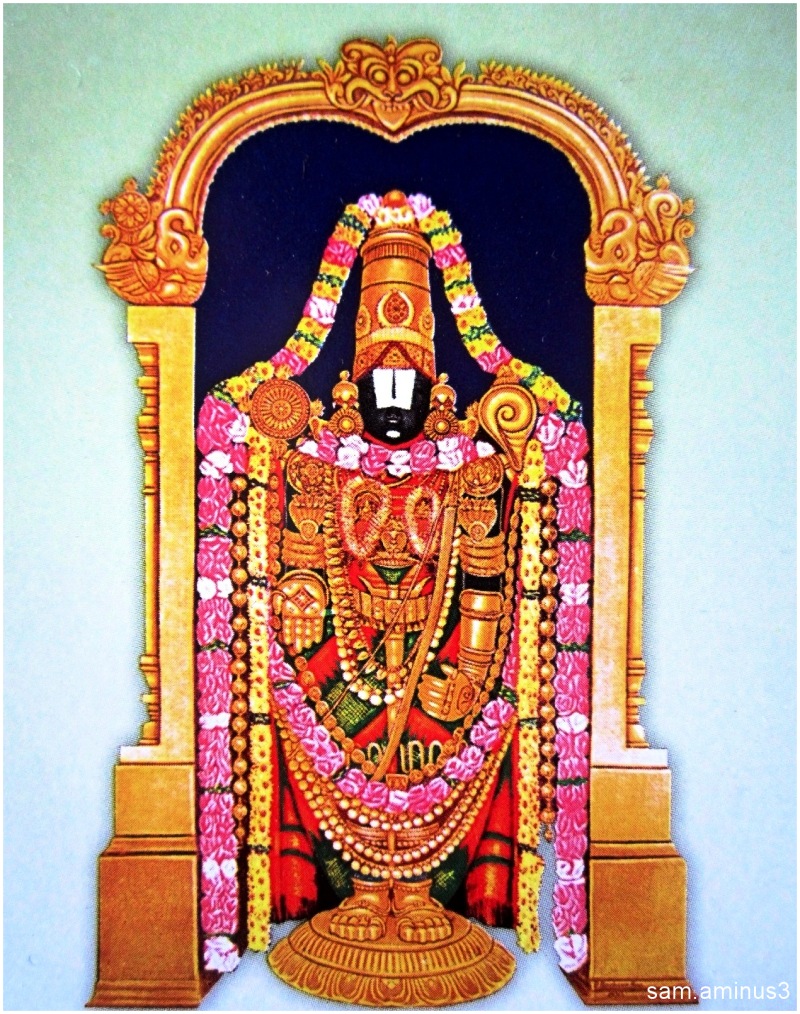 A most popular image of Lord Tirupathi Balaji ...
Tirumala Venkateswara Temple is a Hindu temple in the hill town of Tirumala, near Tirupathi in Andhra Pradesh. It is around 138 km from Chennai. The Tirumala Hill is 853m above sea level and is about 10.33 square miles (27 km2) in area. The temple is on Venkatadri (also known as Venkatachala), the seventh peak, and is also known as the "Temple of Seven Hills".
The presiding deity of the temple is Lord Venkateswara, a form of the Hindu god Vishnu. Venkateswara is known by other names: Balaji, Govinda, and Srinivasa.
The temple is the richest pilgrimage center, after the Sree Padmanabhaswamy Temple in Thiruvananthapuram, Kerala, of any faith (at more than INR 50,000 crore) and the most-visited place of worship in the world. The temple is visited by about 50,000 to 100,000 pilgrims daily (30 to 40 million people annually on average), while on special occasions and festivals, the number of pilgrims shoots up to 500,000, making it the most-visited holy place in the world.
The holy shrine of Tirumala is a celebrated one from times immemorial. It has been attracting large number of pilgrims from all parts of India. Its earliest mention is found in the Tamil literature of the Sangam age.

Under the patronage of almost all important dynasties of South India, this sacred Temple of Tirumala enjoyed the full benefits and glories. The Pallavas, the Cholas, the Pandyas, Kadavarayas, Yadavarayas, Telugu Cholas, Telugu Pallavas, Vijayanagara kings (Sangama, Saluva and Tuluva lines) have left the marks of their patronage and endowments on the walls of the Temples of Tirumala and Tirupathi.

Very colourful as almost everything in India.

Wonderful colors indeed... And the details are very beautiful Have a lovely weekend Sam, and thank you so much for your kind comments :)

A gorgeous image for its fine color and very intricate details.

Thank you very much for the information. Very interesting. The picture is excellent and full of color and light ...
Best regards. Adela

As always - I enjoy your history/culture lesson - with the added picture. It makes it very informative.