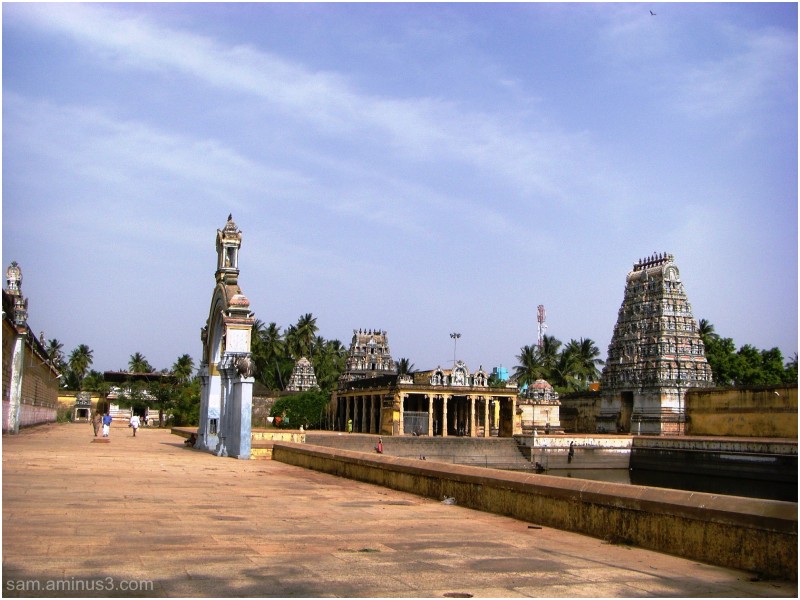 Posted by Sam (Chennai, India) on 9 August 2011 in Architecture and Portfolio.

View of Temple tank and North side Gopuram seen from in side the Temple.
The famous poem in Tamil in praise of 'Lord Shiva and Parvathi Devi' was composed by the Divine Child 'Thiru Gnana Sambandar' at this place.

According to legend, when Gnana Sambandar was three years old his parents took him to the Shiva temple where Shiva and his consort Parvati appeared before the child. The goddess nursed him at her breast. His father saw drops of milk on the child's mouth and asked who had fed him, whereupon the boy pointed to the sky and responded with the song 'Todudaya Seviyan' - the first verse of the 'Thevaram'.
He was known for writing so many great classical poems in Tamil language which are very popular in Tamil literature.
For details of Gnana Sambandar :
http://en.wikipedia.org/wiki/Campantar

I am back at Chennai.
Thanks for your visits and comments. I am grateful for your kind words during my absence.

Are you a religious person yourself

@Chantal: I respect all religions and I believe in science. Thank you very much Chantal :)

A lovely sense of space and serenity here

@CElliottUK: Thank you very much, Chris :)

@PRASHANT: Thank you very much, Prashant :)

Wonderful long shot - I like the sense of open space in this temple. Interesting legend as well.

@Stephen: Thank you very much, Stephen :)

@Mamyni: Thank you very much, Mamyni. You are so kind. :)

@Visioplanet: Thank you very much. :)

Our knowledge of your culture is growing every day with your series of photographs and your text. Thank you very much friend! A hug, Adela

Its my hometown, peace and nice place to be without any pollution. such a big temple with so many history behind it.. very happy to see this photo:) thx fr the post